(From Wikipedia, the free encyclopedia)

The Stabyhoun or Stabij is a rare dog breed that just like the Wetterhoun originates from Friesland, a province in the North of the Netherlands. The first part of the name is probably from the Dutch: "sta me bij" (stand by me). The last part is simply Friesian, meaning dog, which is pronounced "hoon". There are only approximately 3500 Stabyhouns in existence today.

A sturdily built long-coated breed, greater in length than height, which should be neither too coarse not too refined in build. Acceptable colors are black, brown, and orange with white markings. Spotting and/or roan in the white are acceptable but tricolour is objectionable. Dogs are 53 cm and bitches 50 cm, measured at thewithers. Ideal weight is 45 pounds (20 kg) for bitches and 50 to 55 lb (23 to 25 kg) for dogs. 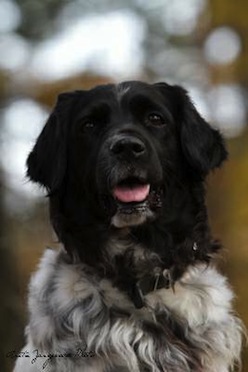 The head should show more length than width, with the skull and foreface equally long. The coat on the head is short. The skull should be slightly domed but not narrow and may never give the impression of being wide, it is carried low on a strong, slightly arched neck. The stop is only slightly indicated. The foreface is powerful, tapering to the nose without getting pointed. The expression of the face should always be gentle and intelligent. The bridge is straight and the muzzle is broad with a nose that is well developed and has wide nostrils. Lips are tight and cover the teeth, which are strong and have a scissor bite. The neck should be free of throatiness or dewlap.

The ears are set fairly low and are strongly developed, which cause the fold in the ear not to take place directly at the root but further on, so that the ear is not carried against the head but stand away from it. They are moderately long and have the form of a mason's trowel. The feathering of the ear is a typical characteristic of the breed, they are rather long at the base of the ear, decreasing in length down to the point where the lowest 1/3 part of the ear is covered with short hair. 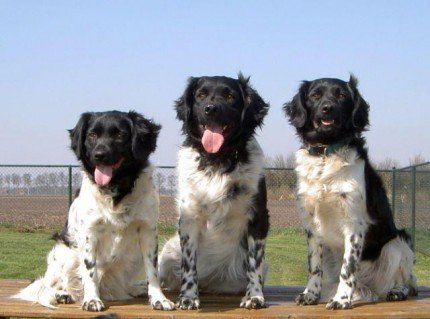 The coat on the body is long and sleek, only over the croup may there be a slight wave and should never be curly. The back of both the front and hind legs should be bushy, as it is on the tail, but should never be feathering. A somewhat curly coat shows that a cross has been made, and that is why the dogs with that sort of coat cannot be recognized as Stabyhoun.

The body should be powerful with well-rounded ribs. The back is straight with the croup only slightly sloping. The loin is powerful, the belly is only moderately tucked up. The tail is long, reaching to the hock. It is set low and carried downwards to the last third part, which is bend upwards in a gentle curve. In action, the tail is lifted, but never so as to curl. The tail is covered with longer hair on all sides to the end, without curls or waves, not feathered, but bushy.

The shoulder is well laid against the chest and the blade well laid back and angulated. Lower arm powerful and straight, forelegs straight, with no weak pasterns. The hindquarters are powerful and well angulated with a low placed hock. The feet should be round and rather big with toes that are well developed and arched, the Stabyhoun should have thick pads.

The Stabyhoun has a nice temperament, friendly, extremely intelligent, peaceful, patient, and willing to please, but has a reputation for being stubborn and very vigilant. A characteristic of the stabyhoun is tolerance toward children and other animals. The Stabyhoun should be obedient and devoted to its owner, making it easy to train, these dogs should never be vicious or snappy.

The breed needs exercise and is not for the lazy owner, although it can be very laid back in the home environment, it still needs plenty of activity. Due to its strong retrieving instinct, is very happy to spend the whole day playing fetch with its owner. 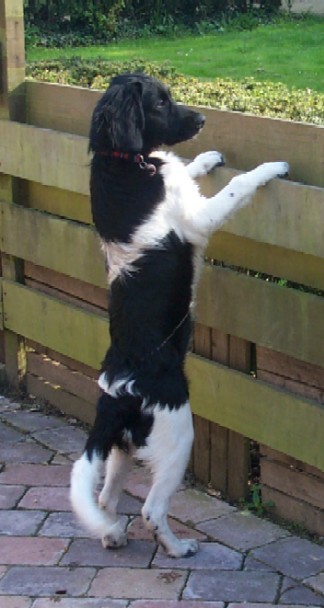 The Stabyhoun is both a retriever and a pointer. It works very well on water, being able to withstand the coldest of rivers and lakes, and is easily controlled over greater distances. It brings in any game alive and undamaged. When catching moles and other vermin, these animals are killed through breaking the neck, but the fur remains undamaged. It is a powerful dog and larger ones are used to pull sleds in the winter.

These dogs have high levels of energy and endurance because of their history as a gundog. People have recognised this and the Stabyhoun is now used in almost all imaginable forms of training and activity:dog agility, obedience, hunting, triathlon, endurance, frisbee, and others.

The average life expectancy is 13-14 years.

The Stabyhoun is a healthy dog. In the past the breed had some problems, but careful breeding expelled most problems. Epileptics occurred in the past, but the inheritable form has luckily not been diagnosed for a long time.

The Stabyhoun does not need any special care apart from proper brushing to keep tangles out. The dogs moult (shed) usually twice a year, and thorough brushing helps the dog to finish its moult in about two weeks. Without brushing they have the tendency to form Dreadlocks, behind the ears in particular. Washing with soap should be avoided when possible, because it affects the natural sleekness of the coat. The coat by its nature will lose dirt very quickly. After a swim the dog is usually quite clean and dry in a couple of hours.

As the Stabyhoun population is so small, careful breeding is very important. The association has breed advisors and the official opinion of the club is to keep inbreeding very limited. More specifically: not over 10%. Although in the last 10 to 15 years dogs have gone abroad, there is no population elsewhere to fall back on. The dogs are sold relatively cheaply in the Netherlands, especially because most breeders see them as a national heritage. This makes them breed out of love rather than out of other motives. The average number of puppies in a litter is 7, and the bitches are not allowed to have more than 5 litters in their lifetime.

The bitch has to be over 18 months and no older than 9 years of age, at least one year should elapse in between litters, the hips have to be x-rayed (not over FCI-C result), and the combination has to be approved by the breeding committee. Sometimes wrong colours may be passed on, which is to be avoided. The association keeps very careful track of these matters. The studs have to be 18 months of age, with the same show and hip results as the bitches, and they are not allowed to give over 8 litters in their lifetime. It is preferred to have no more than 3 litters out of a male a year, so on the breeders' days the litters can be checked and notes can be taken as of the traits that the males (and females) may or may not inherit. Stud-owners are expected to appear on these breeders' days. It is expected the breeders will promote the breeders' days towards those who have bought puppies in the past year, so that as many as possible will visit these days.

The Stabyhoun is a gundog of which descriptions were found as early as 1800. In earlier days it was used for hunting foxes, small game, and birds, and it also turned out to be a fine mole catcher. During the hunting season, it was used as an all-round gundog, an occupation it keeps to this day, although British and German breeds are more popular. It is a fine pointer, an excellent tracker, and also a good watchdog. It has also been used as a draught dog.

The dog used to be owned by farmers who were, in general, poor. It was very welcome to have such an all arounder, because often only one dog could be afforded. As a versatile breed, Stabyhouns have been used throughout ages as a guard and watch dog for the farms, but before all it is a hunting dog.

The breed's looks and purpose have not changed for decades, although in earlier days the breed was often mixed with another Friesian breed: the Wetterhoun, because only working capacities were counted. In 1942 the breed was officially acknowledged and since then crossbreeding between the two has stopped.

Today it enjoys a moderate, though very devoted fancy among Dutch sportsmen and homeowners and its numbers are increasing slowly but steadily. It has yet to gain any significant fancy outside of the Netherlands.

Not many books exist on the Stabyhoun, and none has been translated.